The Cobra gunship spanked into the rocks and rolled onto its right side less than two seconds after takeoff. Plexiglass shattered everywhere as the metal frame contorted. The impact severed the organs of the helicopter, spilling fuel and sparking flames. Hellfire missiles, high-explosive rockets, and 20 mm cannon rounds threatened to cook off from the two wing stubs and the ammo bay. Both 33-inch-wide rotors jerked forward and back, splintering on the rocks as the tips swept around. One blade sheared off the top of the gunner’s seat in the front cockpit as it dipped with the convulsing bird. Shrapnel peppered the air. Blood soaked the controls, the seats, the pilots.

The cargo plane crushes onto the dusty strip outside of Forward Operating Base Dwyer 48 hours later. The silent flight was short—a stone’s throw away from Camp Leatherneck for the hulking C-130. When the engines whine down, I twist the five-point harness of the webbed passenger seat and stand. The blood-red seats line the inside of the aircraft like the meaty ribs of a whale. My Beretta slaps my side in its leather shoulder holster as I follow the Marine in front of me. I exit from darkness into light. 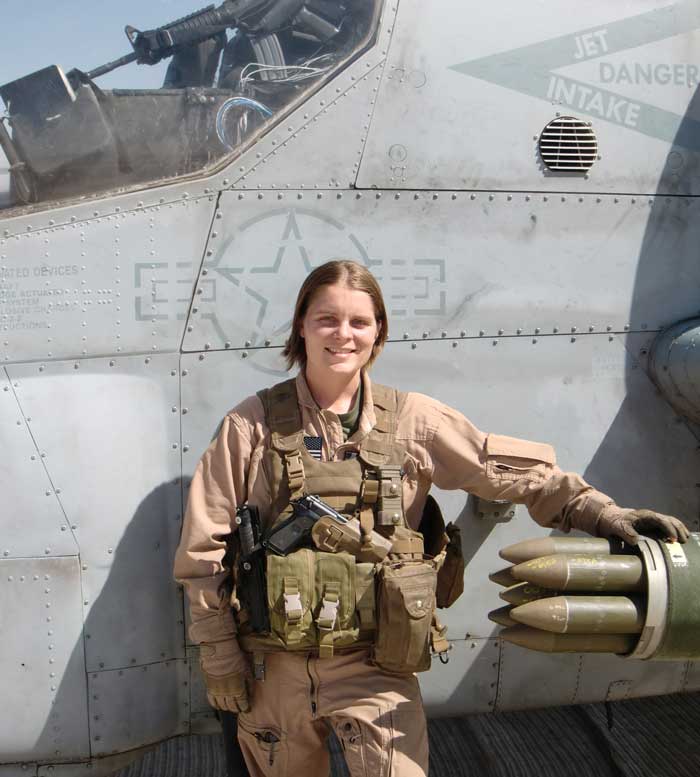 The author beside her AH-1W Cobra standing strip alert at Forward Operating Base Dwyer, Helmand Province, Afghanistan in 2011. Photo courtesy of Anne Boaden

The temperature climbs toward 90 degrees, hot for this early October morning, even for southern Afghanistan. The armpits of my flight suit grow dark with sweat. I’m surrounded by the top brass of 2nd Marine Aircraft Wing (Forward). Wings flash in the sunlight on nearly every uniform.

Rumors spread that the pilot at the controls fucked up. His takeoff wasn’t perfect. He was rushed in the heat of preparing to support a ground unit requesting immediate offensive air support. He failed to notice the mesh matting of his landing pad was coming loose, matting that covered river rocks and desert rubble. The Mobi-Mat was a combat addition to prevent the Afghan moon dust from engulfing the bird on takeoff or landing, causing dangerous brownout. Helicopter pilots considered it a godsend.

The mishap copilot was Ryan Iannelli, a young first lieutenant I’d never heard of, christened “Snooki” by his peers. He had joined his squadron a few weeks before, the new boot pilot of the deployed Cobra detachment based in Forward Operating Base Dwyer.

The pilot in command was Lieutenant Colonel Allen “Grimace” Grinalds, the commanding officer of that Cobra detachment. He had been my first executive officer in a sister squadron in North Carolina a few years prior. He was stern, soft-spoken, fatherly, and destined for general. He gave out advice like, “Nothing good happens after midnight,” and, “If you wouldn’t say it in front of your mother, don’t say it in the squadron.” He emanated fairness, stoicism, and calmness. He was one of my favorite leaders in the Corps.

On takeoff, the skinny Cobra slid forward slightly; it should have launched straight into the air. The right skid caught on the mesh flapping in the rotor wash, pitching the nose down excessively. Helicopters don’t behave like that.

“I have the controls!” Grimace screamed back.

No inputs could save the bird.

Grimace did not die. He was sitting in the rear seat and suffered a bruised kidney and minor scrapes to his hand. Snooki took a jagged rotor blade to the side of his neck, below his helmet. Navy medical personnel sprinted to the scene as Grimace and nearby Marines pulled Snooki from the wreckage. An Army Blackhawk medevaced him to the hospital at Camp Bastion. He was pronounced dead 20 minutes later.

When I step past a concrete T-wall protecting the expeditionary runway, a waiting Marine tells me to load my pistol. The enemy threat is high down here. We’re no longer at cushy Camp Leatherneck, where base order mandates walking around virtually unarmed. I feel an immediate sense of relief as I slam the magazine home. What use is a sidearm if it’s not ready to fire? Everyone else is already locked and loaded. 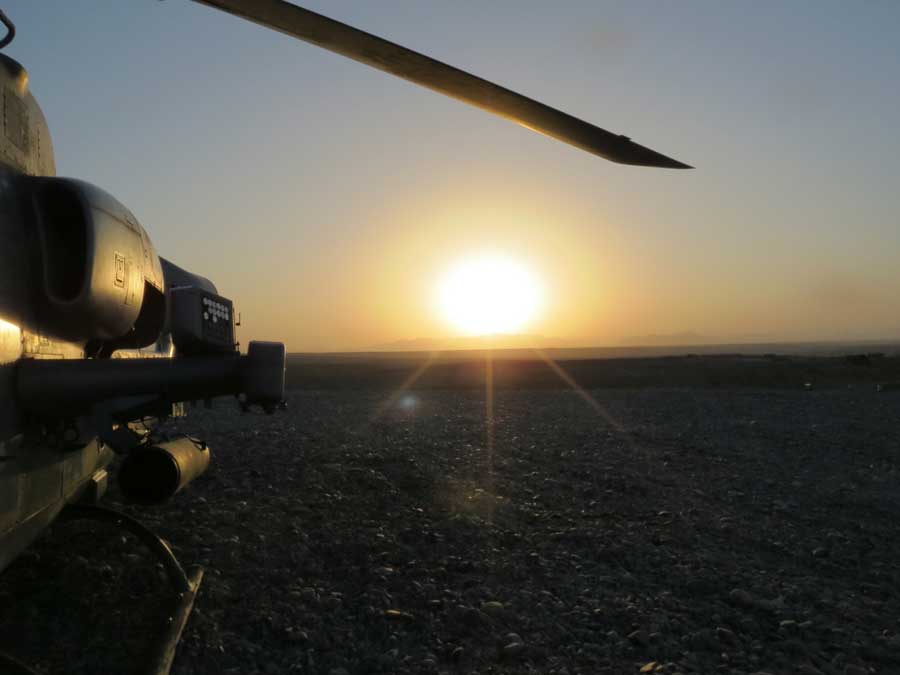 AH-1W Cobra on strip alert at sunset at FOB Shukvani in 2013. Photo courtesy of Anne Boaden

We’re ushered into a single-file line, my two-star general slowly leading the way to a metal pole barn that acts as the chapel. The silent procession enters a large room filled with empty chairs. An aisle runs up the middle. Dead center rests an M4 carbine assault rifle held upright between a pair of desert boots with a flight helmet cresting the top. A set of dog tags hangs from the pistol grip of the rifle. Snooki’s name is stenciled on his gear.

Every naval aviator is connected by the gold wings we wear on our chest. They symbolize a shared journey of knowledge, challenge, and check flights. We’re all volunteers. I didn’t know Snooki personally, he was too new, but I know my presence is essential. I choose a seat near the back.

The piano player sets the mood with churchy hymnals on his electric keyboard. Fine dust settles everywhere as Marines wearing tan flight suits and desert camouflage filter in. I glance around the somber room. I know more than a few of the squadron pilots. Some I haven’t seen since flight school, or SERE school, or officer training, but they nod to me as I make eye contact. They are all my skid brothers.

Marines are still cramming into the back of the room as the priest and wing chaplain start the memorial.

“Let us pray,” they instruct.

I lower my head.

Snooki died doing the thing he loved best: flying attack helicopters. This memorial, I am reminded, is not to mourn his death, but to celebrate his life. I learn he was a man of great moral character, a devout Christian, and a loving brother and son. Snooki had been asked to deploy to Helmand Province with little notice to replace another pilot. He had happily accepted. The Marine Corps promoted him posthumously to captain.

Two of Snooki’s friends walk to the wooden podium. Heavy circles raccoon their eyes. They trade their favorite Snooki stories—how he’d fill a room with laughter with his jokes and singing, goofing around just to make someone smile—and remember him for living life to the fullest. They choke on their words. When they can no longer continue, the pianist takes over.

Amazing grace, how sweet the sound,
That saved a wretch like me.


Tears streak down the exhausted faces of the Marines in front.


I once was lost, but now am found,
T’was blind but now I see. 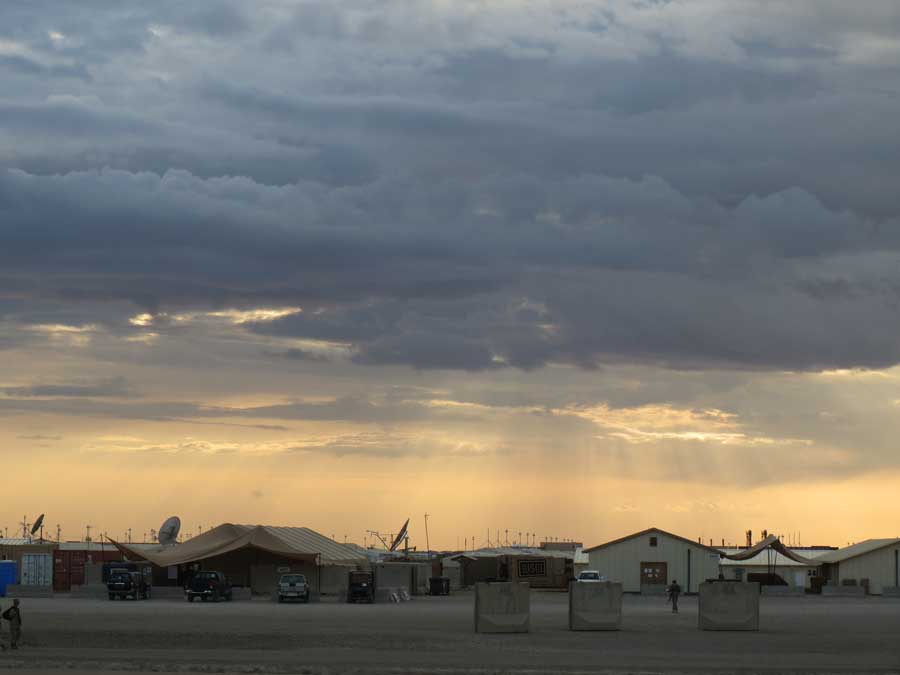 View overlooking the USO at Camp Leatherneck after a storm in 2013. Photo courtesy of Anne Boaden

Once the last note trickles from the piano, the entire room stands. The scuffle of boots and a few sad sniffles sound small in the solemn space. The dry air is still.

Marines quietly pay their respects at the front, kneeling before the shrine. A few make the sign of the cross before rising. I taste dust in my mouth. I hear an aircraft overhead, climbing into the hot sky beyond our metal shell. I watch my peers walk to the front with wet faces. I wait.

When my row starts moving, I pause, giving myself space from the captain ahead of me. The aisle stretches out, impossibly long. I march automatically. My booted heels strike the deck too loudly. When Snooki’s embossed dog tags come into focus, I stop and kneel, hesitating at the bottom.

The shock of his death weighs on my conscience. A minor aviation mistake should not have cost Snooki his life. He was in the wrong place at the wrong time. Simultaneously, I feel relieved my old executive officer survived. I simply knew him better. I feel guilty for feeling relieved. One life is not worth more than another. The urge to cry hammers my throat and I blink hard.

I say nothing until I rise and turn left, coming level with the two Cobra pilots watching me. I don’t know either of these men, men my age flying the same machine as me who’ve just spoken about their dead best friend, but it doesn’t matter. It matters that I’m here. It matters that they’re here. I hug each of them.

This is my first combat memorial. It won’t be my last.

A Fake Raid, A Fake Village, and a Sinking Track
A Military Spouse’s Journey From Annoyance to Advocacy