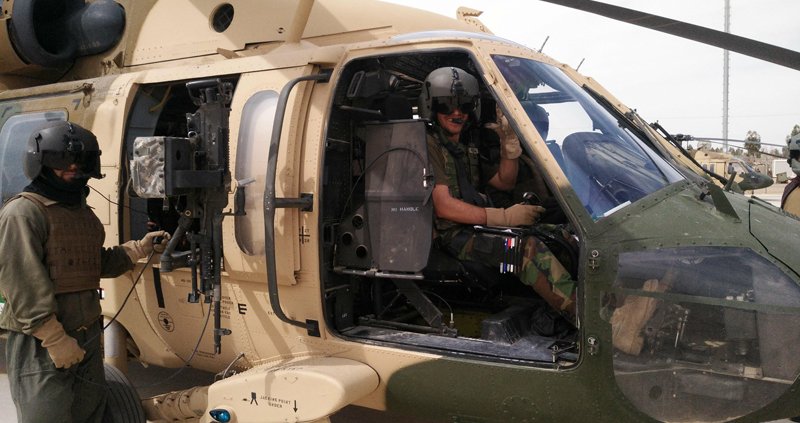 Personal diary, Nov. 25, 2018: “We put our two dead pilots on an Afghan C-208 today, to fly to Kabul to be buried. They were in cheap press-board coffins, each covered in a weary Afghan flag. They were seen off by lines of Afghans and Americans and carried on the shoulders of an Afghan Honor Guard. It is the first time I have saluted the flag of another nation as it went by. These were our first, but as these months continue … I fear they won’t be our last.”

I distinctly remember the day I met 2nd Lt. Kakar of the Afghan Air Force. I was a brand-new adviser, doing about as far from what a normal Navy helicopter pilot would do as possible. Kakar was a young, quiet, almost pensive officer, newly graduated from his mission qualification training with the contractors on Kandahar Airfield and assigned to the 441st Air Expeditionary Advisory Squadron for his combat skills training, which would prepare him to fly missions in the UH-60A Black Hawk for the AAF. At the time I was in charge of all incoming student aviators, helping them navigate the syllabus. Kakar seemed a promising, if slightly reluctant, pilot. 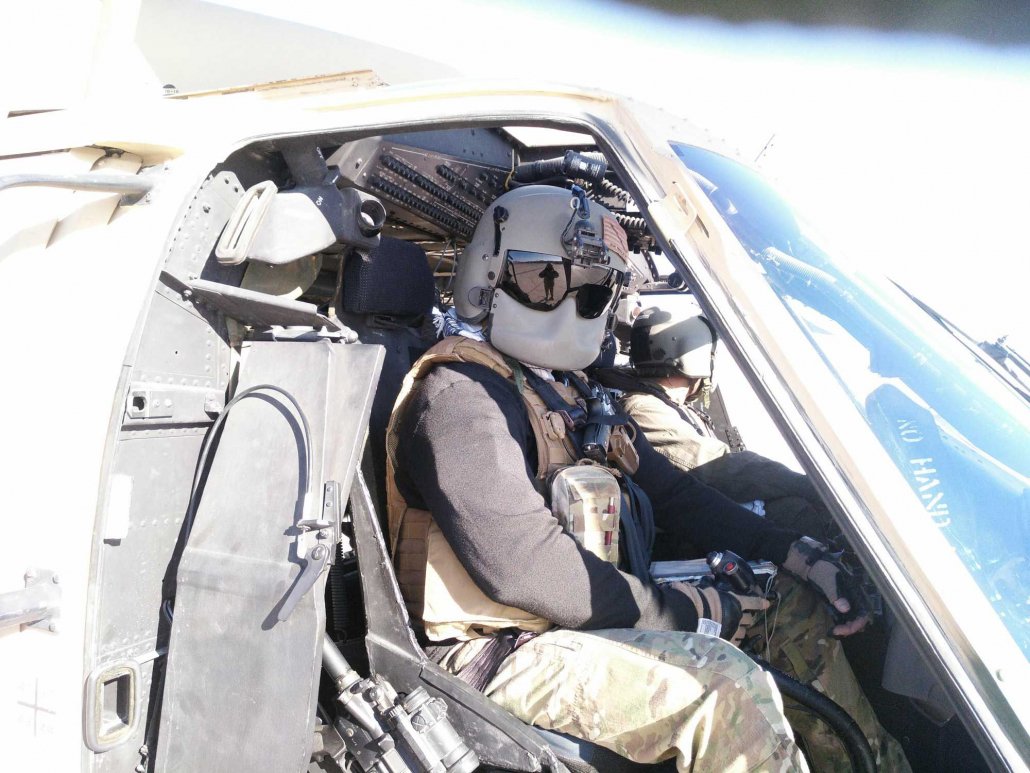 Jack McCain poses for an Afghan crew chief before a teaching flight. Photo courtesy of the author.

What brought me to Afghanistan, and into the Afghan Hands program, was as much my own boredom—and a romanticized idea of adventure—as anything else. I had served a full flying tour in Guam before my assignment as an instructor at the Naval Academy. In Guam, I deployed often, performed live search-and-rescue, flew low at night with Special Operations troops on board, and lived the generally fast-paced life afforded a naval aviator willing to tap dance the razor’s edge between escapade and catastrophe.

My metamorphosis from that life to my quest to earn a graduate degree and teach midshipmen, as well as the later yearning for excitement that steady life would produce, are as much to blame for my later experiences as anything else. After I begged my assignment officer for any job that might bring me close to combat, I received my orders to the AFPAK Hands program, with our bit being “Afghan hands.”

Designed to create a cadre of military officers and senior enlisted who spoke a local language to develop lasting relationships in Afghanistan, the program was a dubious success at best. But it was the perfect place for people with an interest in the subject who didn’t mind having just enough rope to hang themselves with. After a year of training in advising; basic weapons proficiency; Afghan history, politics, and culture; several months of intensive Dari; and a transition course for the UH-60, I made my way to Kandahar. I rapidly found the adventure I had been so eager to seek and finally saw the war I had been so hoping to see in its vivid technicolor of horror, heroism, and humor. 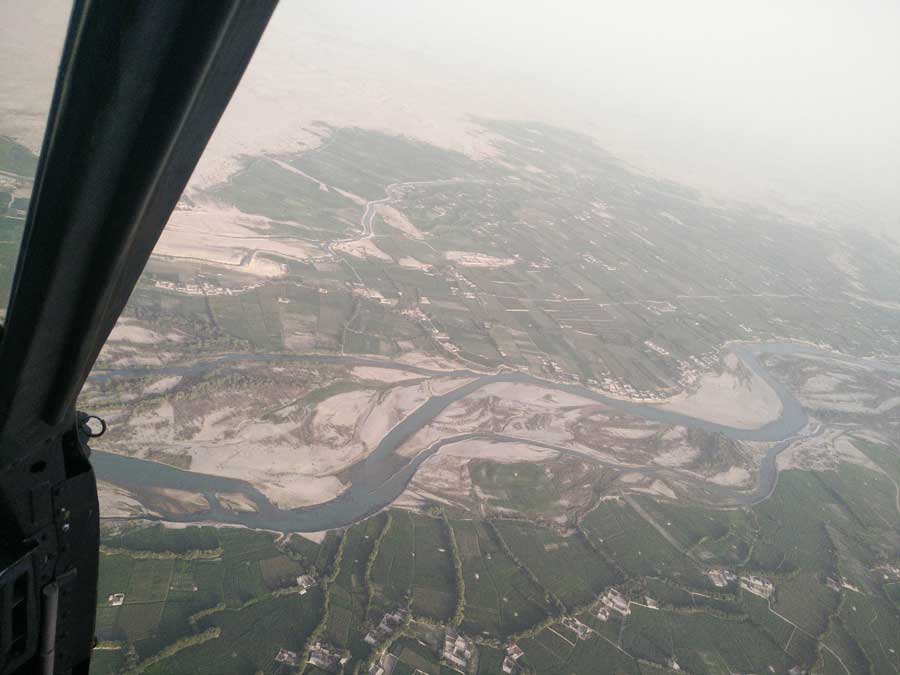 Crossing the Helmand River—enemy-held territory—with the aircraft doors off in 2018. Photo courtesy of the author.

I filled a strange role in my squadron. As the only Navy officer, I was already different enough to be granted some measure of independence—a latitude I heartily abused in my dress and appearance—but as an Afghan hand, I was even less homogeneous. I took my role seriously, pridefully being the “Afghan voice,” often in dissent, when it came to staff, training, and mission decisions. My language ability also granted me an enhanced rapport with the Afghan pilots and crew chiefs, something I coveted. I tried to become as close to my counterparts as someone not “of Afghanistan” could be.

In my first briefing with Kakar, I noticed a few things, the first of which was his youth. This was my third deployment, and despite that I was only 32, he seemed young even by his compatriots’ standards. The wisps of his mustache were only a few, and his lean face and easy smile fluctuated wildly from ruminative, bordering on pensive, to a broad grin with an accompanying shy laugh. He was also one of the more caring pilots, especially in matters of religion. Before our first mission, he pulled me aside and reminded me to include time before the flight for him and his crew chief to pray. While we waited, he would pace with his hands clasped behind his back, working his ever-present Tasbih (prayer) beads between his fingers. The more I worked and flew with him, the more I grew to admire his companionship and to look forward to seeing him grow as an aviator. In my own mind, he fast became the human face of my pilots. 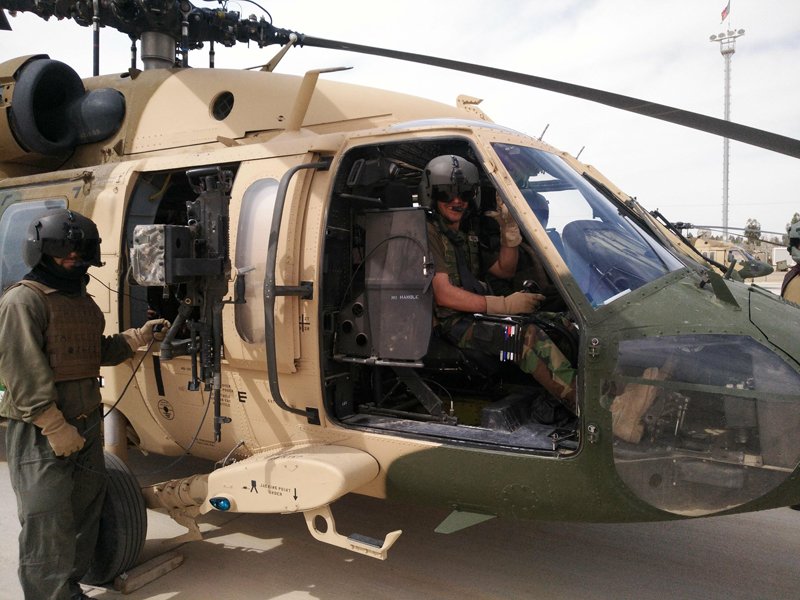 An all-Afghan crew prepares to launch on a medevac mission in Helmand province in 2019. Photo courtesy of the author.

It was Aug. 8, 2018, when I completed 2nd Lt. Kakar’s aircraft commander upgrade flight. This is one of the more solemn responsibilities of any instructor: In essence, it grants him the trust to be responsible for the lives of his crew, as well as the safe conduct of his aircraft.

A few days later, on a routine flight between Helmand and Kandahar (as routine as flying low in an aircraft with no integrated self-defense systems, with a half-Afghan crew, over the most dangerous part of the country can be), I would acquire a memory that still sticks with me today as brilliantly as if it had just happened. As the sun set, Kakar asked me to take the controls.

Worried something was wrong, I took the sticks. 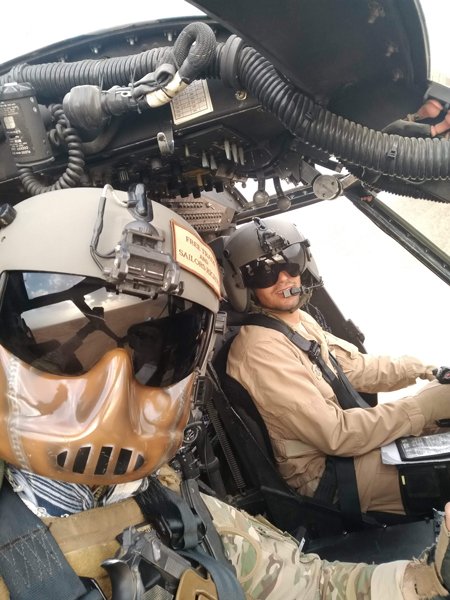 Jack McCain and his Afghan copilot, Capt. J., head for Kandahar in 2019. Photo courtesy of the author.

It is time for prayer.

Puzzled, I nodded. He sat there, raised his hands, and silently made his devotions while we flew east, away from the falling sun—perhaps the perfect metaphor for an adviser serving in Afghanistan.

On Nov. 24, 2018, I was the duty officer, responsible for reviewing the now all-Afghan crews’ mission plans for the day. I was proud to see Kakar on one of his first flights as an aircraft commander, which is usually the most exciting part of any aviator’s career. He was headed to a smaller outpost near the Kajaki lake in Helmand, moving food and cargo to the beleaguered Afghan troops, who were desperately in need of the supplies.

Communications as an adviser do not work the same way they do with U.S. forces. There is no satellite communications, no data links giving precise information; most tidbits were relayed by the Roshan cell network, and came in piecemeal, if at all. About an hour after take-off, I remember we got a cell phone call from one of our pilots in the squadron.

An aircraft had been downed, he told us—but not which one or how. 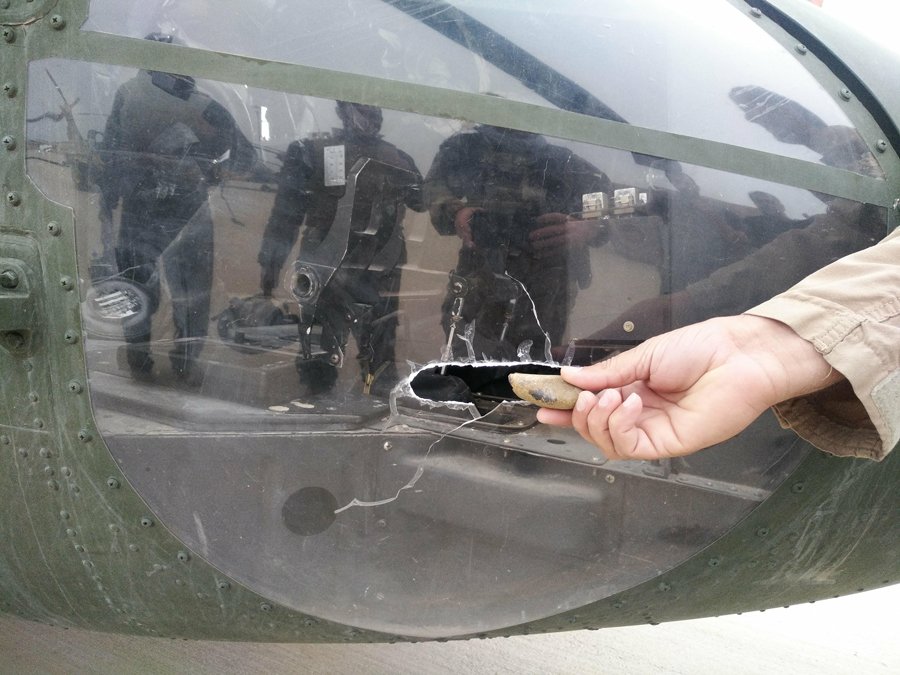 Damage to a Black Hawk from rocks that were thrown at the aircraft by sling in Helmand province in 2019. Photo courtesy of the author.

My own recollection of the events in the hours following are more impressions and snippets than anything approaching coherence. Rumors related through cell phones. Grainy text message photos of a burning aircraft. Trying to get a UAV overhead but being frustrated because we worked for the Afghan side, not the American side. Worry for my pilots. Confusion. Denial. Hope. And the final shattering anguish of watching the crew chiefs come back, shaken but OK, and knowing both pilots had been killed. 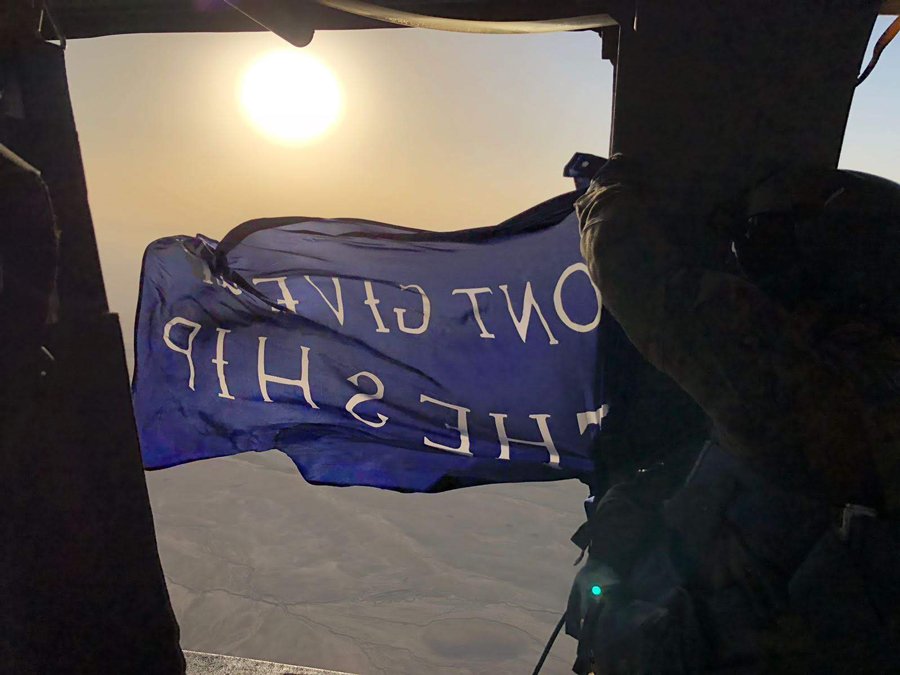 The U.S. Naval Academy flag flying over Kandahar from a Black Hawk in 2018. Photo courtesy of the author.

The copilot, Captain Najmi, had been pulled from the wreck, but his legs had been amputated. He bled out because of a lack of available tourniquets. Second Lt. Kakar burned alive in the ensuing fire, trapped in his seat because no one had a knife available to cut him out.

I did not witness it, but the image of his young, kind face charring as he screamed and struggled to escape will live forever in my memory. The senselessness of it, and the feeling of responsibility, however tangential, will also never leave me. 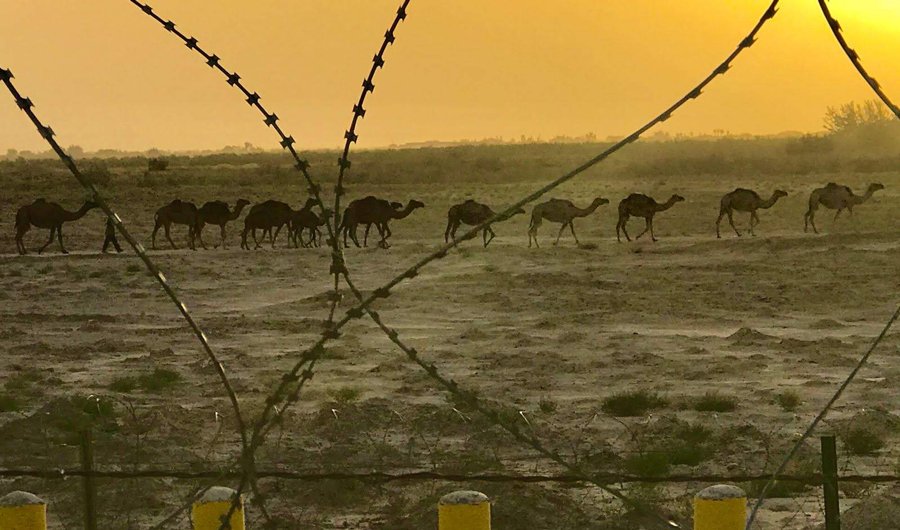 Camels cross the desert in Afghanistan. Photo courtesy of the author.

I desperately tried to reconcile Kakar’s death after it happened. I struggled to communicate those feelings to friends of mine, many of whom had difficulty understanding why I would feel so devastated by the deaths of two Afghans—after all, they weren’t Americans. To me, there was no difference. Those two dead men shared the same risks and flew the same aircraft as I did. Kakar had shown me a picture of his wife, breaking an enormous cultural taboo. He was a human being, fighting to free his nation, the same as I would under the circumstances. He loved to fly, just like me. He was my pilot, as much as any of my American students had been. 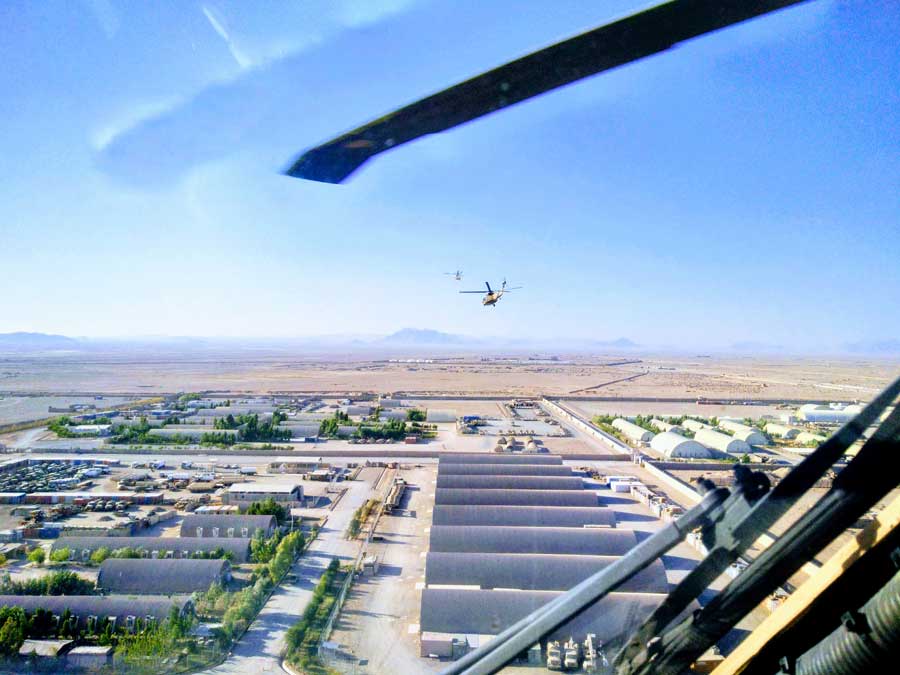 The author’s section follows a helicopter crewed entirely by Afghans as they leave Shorab, Helmand province, in 2018. Photo courtesy of the author.

But to explain that, to break away from the monolithic view of Afghans as just people in Afghanistan, and not human faces, and names, and prayers, and a screaming, burning young man, has been the most difficult part of my own reintegration.

And it is why putting these thoughts to paper may be the most important thing I ever do.

The next time you hear of an explosion in Kabul, or of the crash of a helicopter in some Afghan province you cannot pronounce, remember this, the story of young 2nd Lt. Kakar. Remember his humanity. Remember that he died fighting for the same ideals of liberty that so many Americans have. Remember that his story is so much the story of Afghanistan: youth destroyed violently while fighting for a better home.

As Afghan War Nears its End, a Marine’s Guilt Intensifies
Scroll to top