“Let me out,” I screamed, as if the desperation in my voice could overpower the comedic cliche of the drunk girl screaming from a jail cell. I pounded on the bars, sobbing. “I’m a fucking Marine Corps Officer.” I heaved into the solitary stainless-steel toilet, forcing myself to purge the alcohol and the past five hours out of my system. Succumbing to my panic, I curled into a ball on the floor, alternating between righteous indignation, “Who gets arrested for a DUI out of an Uber?” and self-loathing, “Why couldn’t you just keep your mouth shut, Maggie?”  My lack of control in this situation mirrored perfectly with my lack of control over my own emotions and decisions.

Gritting my teeth, I watched through the bars as the arresting officer inventoried my personal things, placing two bracelets off to the side—one thin black aluminum band honoring the cousin who had been killed in Iraq almost a decade prior, a death that inspired my own military service—and one green woven bracelet made in Afghanistan and worn by a Marine in Iraq before it was regifted to me before my first deployment.

“If you lose that, I’ll be pissed!” I shouted, as if I still had power and authority. As if my Marine Corps rank translated to local law enforcement hierarchy. As if my anger were rightly placed toward the officer instead of at my own stupidity.

Hurling insults at anyone in sight, I realized that my military career hadn’t made me a hero. It hadn’t changed the worst parts of me. And it couldn’t protect me from my own demons. 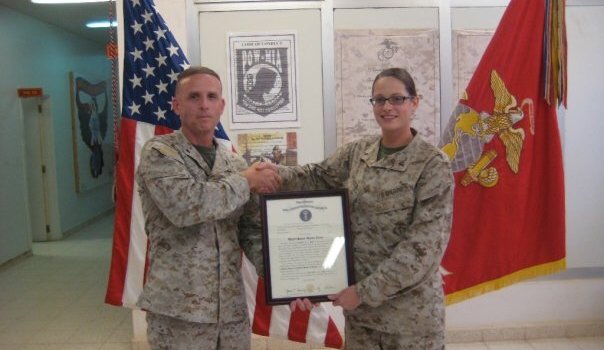 Promotion to 1st Lieutenant in the Marine Corps, in Iraq, 2009. Courtesy of Maggie Seymour

It didn’t stop me from the violent outbursts followed by relentless sadness. My Marine Corps ID card never stopped me from ordering one, two, three more glasses of wine or shots. My uniform served as no armor because the problem wasn’t coming from out there. It was rooted firmly in myself. But I knew how to switch into hero mode when it counted. As a Marine Corps officer, I knew people assumed I was a model citizen, living by the code of “honor, courage, and commitment,” so I let them think just that, even though there were times I didn’t believe it myself.

“If I’m not deployed or something,” I snapped back, still not accepting that my arrogance wasn’t an asset. I was too angry to be scared as the bondsman shook his head in disgust and walked out of the room. I was too indignant to understand that I’d just talked myself into a revoked bail and a long weekend in jail.

Handcuffed and moved to a truck for transport, where the thick steel bands cut into my wrists and ankles. As I resumed my sobbing phase, a man, a fellow troublemaker, calmed me down from the other compartment. He assured me that it’d be okay, that I was just going to the holding cells, and that I was more than just a criminal. 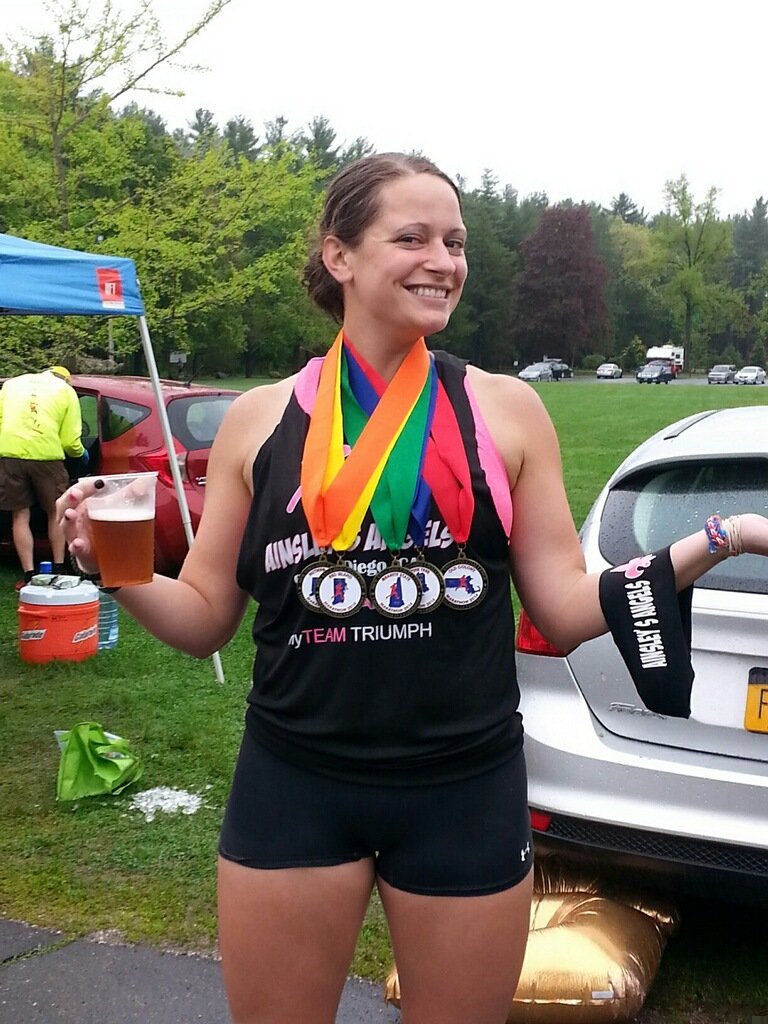 Maggie during a six-marathons-in-six-days event across New England, in 2014.

I donned the orange trousers, assuming the uniform of the disgraced, making a complete transformation. I slid the scratchy, thick, and moldy-smelling blouse over my head. Too dehydrated to cry, I grabbed my “mattress” for the weekend. I’ve seen yoga mats thicker than this, I said to myself. For the first night I was alone in a cell. I tossed around, the hangover taking the place of the intoxication. I heard someone screaming, or praying, or maybe both in the cell down the hall. I was reminded of the stories of churchgoers, overcome by the spirit of the Lord, speaking in tongues. I didn’t know anything about that, unless the Lord came in a bottle of Shiraz. I reminded myself that time never stops and that each second brings me closer to the moment where I can explain everything, where I can clear up this misunderstanding and go back to being Captain Seymour, Marine, PhD Candidate, and all-around model citizen.

I was moved to a group cell the next morning. My newest orange-clad neighbors were friendly enough. I imagined the cell as a cocktail party, thinking of how I’d introduce myself to each woman, but I didn’t feel like being social. “I’m not like them,” I told myself, overlooking the fact that we were all dressed alike, women, and living in the same room.

Lying in my bunk that night, I realized I wasn’t embarrassed by my actions; I’d known I was capable of that behavior, I’d done it time and time again. You can only ignore hangovers or bruises on your face and body for so long. You eventually have to stop lying to yourself after years of clothes stained with wine, vomit, or urine. I was acutely aware of my problems with alcohol, or more accurately the problems I was masking with it. 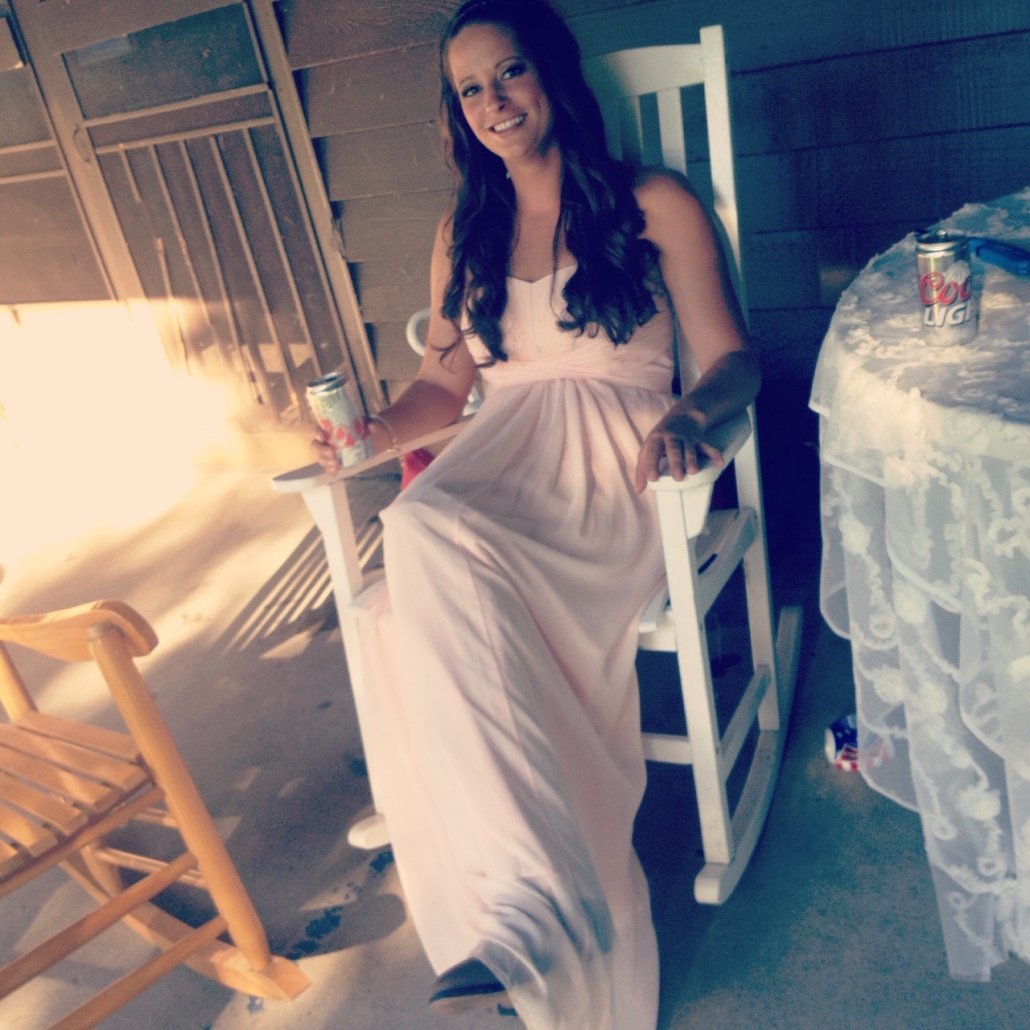 At a friend’s wedding in Illinois, in 2014. Courtesy of Maggie Seymour

I don’t know where it started; drinking had been a part of my life since high school. At first, I drank to turn everything on—to have fun, rebel a little, to party. Then before long I was drinking to turn it all off—to turn off my brain, my fears, my anger. It became the moment when I didn’t have to compete, to succeed, to plaster on the fake Marine Corps facade. I never really felt like I fit in with my strong-jawed fellow officers; I didn’t read military literature at night or marry my college sweetheart. I wasn’t a man and I could never be one of the boys—but I could drink with them. Staying for another round was my “in.” Drinking became, selfishly, the time where I didn’t have to serve others, I only had to serve myself.

As I reflected on my life, it wasn’t that I learned something new about myself after my arrest. It was that now everyone else would find out, and once everyone else knows, broken things are harder to fix. You can fix things in secret. That’s what I had been taught. That’s what military leaders had taught me too, to keep things in-house and handle them at the lowest level. I wasn’t worried about getting wasted and pulled over, not yet. I was worried that I had finally gotten caught. That I’d be forced to face, head-on, the problems I was trying to drown, and the problems I had brought on by self-medicating.

I was going to have to acknowledge my insecurities: the way I never felt good enough for the praise I received. The way I could laugh off my problem by bringing up how the Marine Corps was founded in a bar. The way I saw my problem in the bloodshot eyes of my fellow Marines, who were also in pain, also lonely, and too proud to reach out. The way I know they saw me. 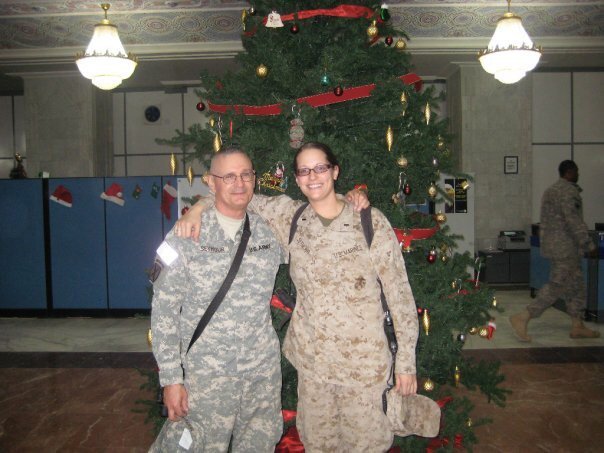 Maggie with her uncle, LeRoy Seymour, in Baghdad in 2009. Courtesy of Maggie Seymour

I would have to acknowledge that there were two “Maggies”—one reflected in the public life of achievement and community service, and one that only the bartenders and bouncers knew. The latter, who felt so guilty about her own privileges and praise that she routinely tried to destroy both, almost daring others to still love her if she weren’t a doctor, or a captain, or all the things she achieved. 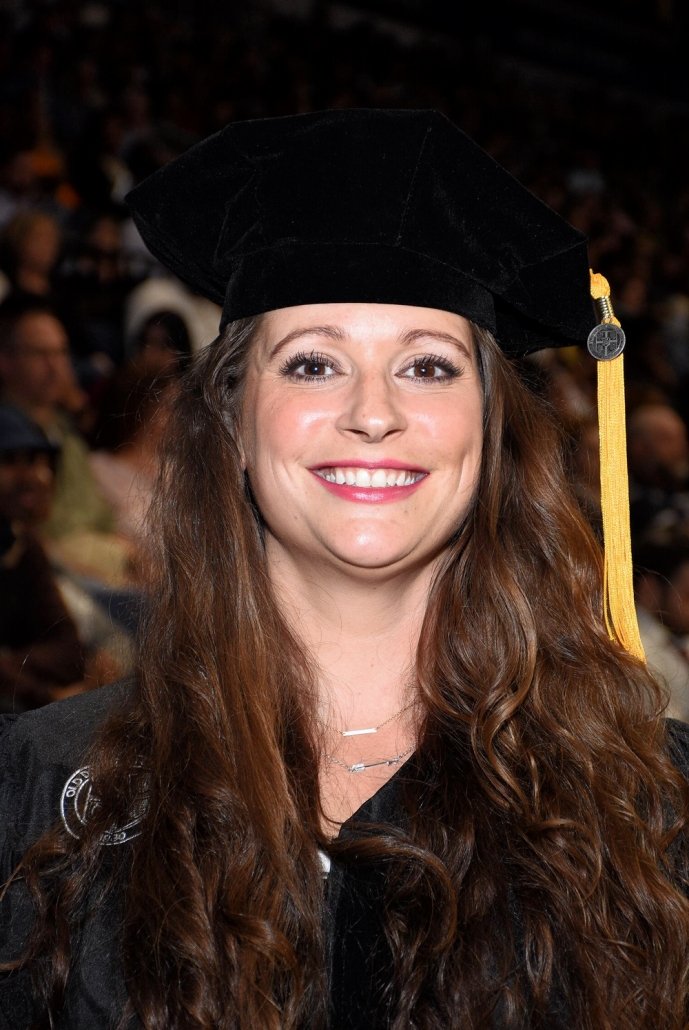 Graduation from PhD program at Old Dominion University in Norfolk, VA, in 2018.

Their Love Would Thrive Or Die Thanks To The Corps

From One Battle to Another

So We're Famous, So To Speak
Baggage