The War Horse News has sued the Navy and Marine Corps, alleging that they broke the law by denying requests for a database of public information about officer misconduct.

On Friday, The War Horse filed the lawsuit in the U.S. District Court for the District of Columbia, alleging that the Department of the Navy and the Marine Corps have repeatedly violated the Freedom of Information Act by withholding the records.

“The War Horse’s mission to increase public awareness of the military justice system is important and just,” said Chad Darcy, a Marine veteran and an attorney with Davis Wright Tremaine, the law firm representing The War Horse pro bono for the suit.

“It is disappointing that the Department of the Navy and Headquarters Marine Corps issued a blanket denial of The War Horse’s FOIA request. We welcome the opportunity to vindicate our client’s position in this litigation.”

The existence of the records, dubbed the Black Book, was first reported by The War Horse in April during a four-part series about officer misconduct in the Corps. The exposé relied on interviews with more than two dozen active and retired attorneys, judge advocates, former public affairs officers, junior and senior enlisted personnel, and legal experts from three separate branches and the private sector.

Following publication, the Marine Corps did not challenge the accuracy of any details included in the series. 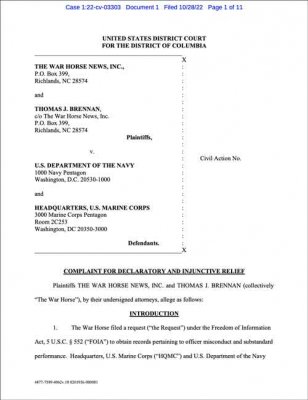 The War Horse filed the lawsuit in the U.S. District Court for the District of Columbia.

The reporting revealed that, inside the notebook, all investigations of and crimes committed by officers are kept meticulously tracked—and often omitted from the official record and congressional disclosures—throughout their careers. During the reporting, multiple Marine officers told The War Horse that the ongoing behavior highlights a mix of favoritism and “sugar daddy deals” that are overseen by military lawyers and the Corps’ most senior officers.

The battle for the misconduct records began in June when The War Horse first filed its request to the Corps for “a full copy of the Officer Disciplinary Notebook Management System (ODNMS) database. Releasable information should also include all edit histories to ODNMS entries and contain all ODNMS records since inception.”

One month later, the Corps denied the request and alleged the records were exempted as “attorney work-product” because the records are deliberative in nature.

“It’s not attorney-work product,” said an active-duty Marine attorney who has access to the Black Book, and who disagreed with the government’s assertion. “It’s quite literally a system of records under the records retention act and only contains raw data. Dates. Times. Reports.”

Following the declination, The War Horse filed its appeal to the government, which declined it Aug. 8. The Corps reaffirmed its position that the Officer Disciplinary Notebook was attorney-work product, and stated, “There is no need to conduct any analysis concerning either the attorney-client privilege or the deliberative process privilege, both of which are nonetheless applicable, at least in part, to each ODNMS entry.” 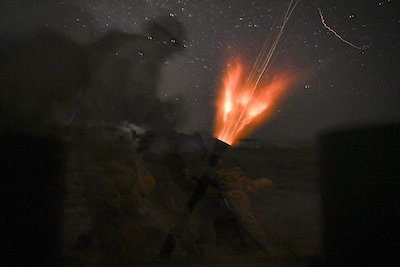 The War Horse’s complaint disputes this claim by pointing to the Corps’ own user guide for the Black Book. The suit also highlights that entries to the Black Book are purely factual and that the system’s purpose is to track the status of officer misconduct investigations, and that many individuals, including many non-attorneys, review and edit The Black Book on a weekly basis. The database is not used to discuss or share legal opinions, case strategy, or similar substantive analyses.

“The Officer Disciplinary Notebook epitomizes the military’s two-tiered justice system and contradicts many of the leadership traits that are taught to every Marine, like integrity, tact, and justice,” said Thomas Brennan, a 10-year veteran of the Corps and the investigative reporter who reported the Black Book series.

“The lack of transparency about Marine officer misconduct is a slap in the face to the Congress that appointed them and the very citizens these officers swore an oath to defend.”

The War Horse will continue to provide updates as the case progresses.