Permanent change of station. About every three years, married service members pick up and move to a new unit and a new job. But beyond the stress of changing homes, states, schools, and, sometimes, countries, the move often means that people like Lafleur see their careers take the back seat until they can find a new job in a new town.

For Lafleur, that’s complicated further by her chosen career.

“By education, I’m an attorney,” Lafleur tells The War Horse. “Part of the difficulty in being a military spouse is the licensure. So, bouncing around state to state, I’m not exactly going to take the bar every time I turn around.” 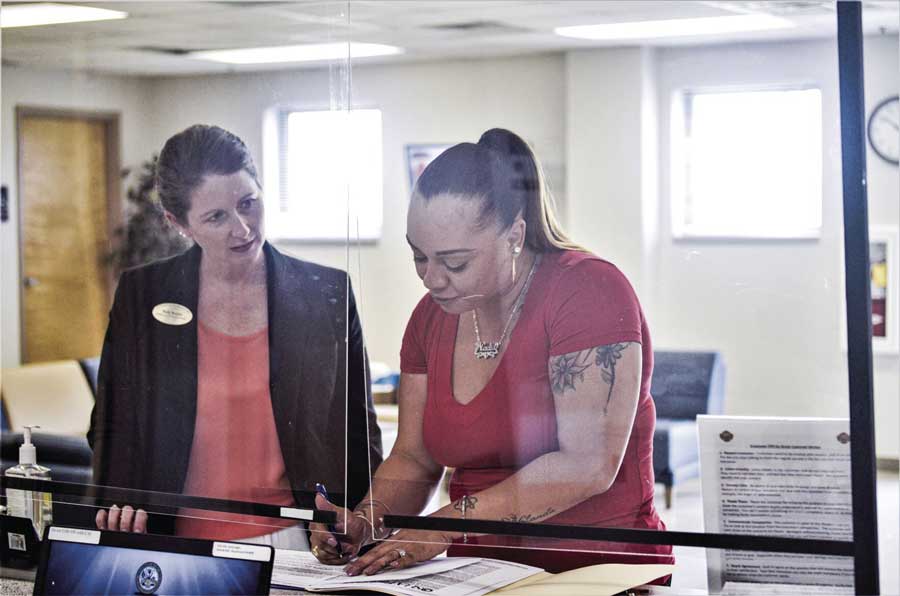 Netalie Mercado, military spouse, speaks with Holly Nusom in July at the Spouse Employment Center at Fort Campbell, Kentucky. A permanent change of station, or PCS, is something most spouses will experience during their time married to a service member. Photo by Sirena Clark, courtesy of the U.S. Army.

She now works as a paralegal near her husband’s base, Marine Corps Logistics Base Albany in Georgia.

Not every military town—think Camp Lejeune in Jacksonville, North Carolina; Fort Drum near Watertown, New York; or Goodfellow Air Force Base in San Angelo, Texas—has the capacity to support the careers of all spouses. Start adding in master’s degrees, professional licenses, or management experience, and the pickings grow even slimmer.

And not every employer will risk hiring someone who could leave with little notice and who isn’t likely to stick around for the long term, in any case.

But during Covid, Lafleur’s office shut down briefly and her employer outfitted her and her coworkers to work remotely.

“Without Covid, that’s not anything that would have been on their radar probably ever,” Lafleur says.

While the pandemic stressed the nation beyond capacity in several ways, it also caused many to celebrate the possibility of attending a meeting in pajamas. But for military spouses, employers’ acknowledgment that workers can be just as productive, if not more so, from home could put an end to giving up one’s career for a husband or wife’s military service.

“Military spouses emerged as the premier remote workforce during the pandemic,” says Meredith Lozar, a military spouse and executive director of programs and events for Hiring Our Heroes. “We said, ‘We’ve done this, let us tell you how to do it, we know how to manage great amounts of stress, we’re highly organized, we can help everyone get through this.’ Now we have to keep that momentum.” 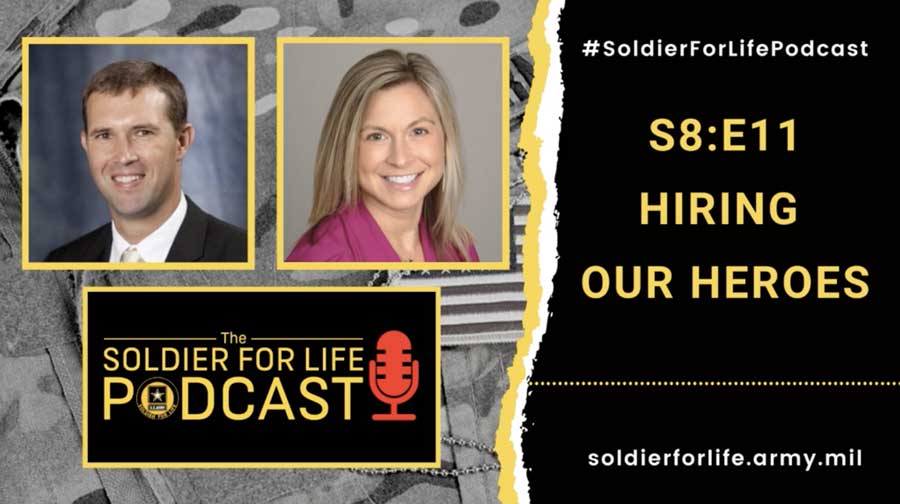 Meredith Lozar heads Hiring Our Heroes, and part of her work entails helping military spouses who struggle with building careers even as they follow their husbands or wives from base to base. Eric Eversole, left, and Lozar spoke about employment resources with Lt. Col. Olivia Nunn on the #SoldierForLifePodcast. Still from Nunn’s video, courtesy of the U.S. Army.

For years, working from home was the exception, not the rule. But as the Covid pandemic brought broad change for everyone, it brought hope for military spouses—who face high rates of unemployment, stalled careers, and few networking opportunities. With the increase in remote work, they found stability and opportunities they hadn’t seen before. And while it’s not a cure-all solution—it’s still hard to manage a store, work in a restaurant, or see patients from home, and many bosses have required their employees to return to the office—it’s still a sign of the potential of an untapped worker pool.

‘It’s been this unwavering, staggering number’

“When you look at the active-duty component [military spouses] only, it’s about 24% unemployment, and it has been for the past decade,” Lozar says. “So, it’s been this unwavering, staggering number. And that is typically, in a non-Covid environment, about six to seven times higher than their civilian counterparts.” 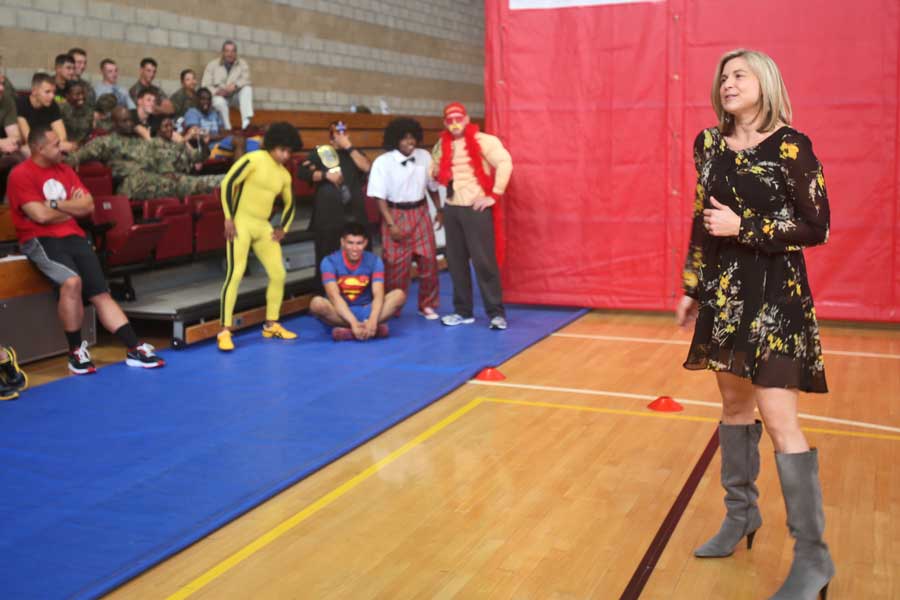 In 2014, Meredith Lozar served as the director of the Navy and Marine Corps Relief Society at Camp Pendleton, California. Here she speaks to Marines during a dodgeball fundraising tournament to increase awareness for the organization and raise funds. Photo by Lance Cpl. Shaltiel Dominguez, courtesy of the U.S. Marine Corps.

While some estimates of military spouse unemployment rates are lower than those Lozar cites, they may not filter statistics by active-duty status versus reservist or retiree spouses, which may affect spouse employment opportunities: Reservists and retirees tend to stay in one place. Still, even conservative estimates from the Labor Department show military spouses with an unemployment rate of at least 13% as of 2017—around three times the national rate at the time.

“One of the biggest challenges—is the reason for their unemployment—is that they move 10 times more frequently than their civilian counterparts,” Lozar says. “Every two to three years, we are living in a new state, with a new address, with new rules if it comes to licensure or certification, and new challenges if we’ve become an entrepreneur in developing a portable business model. That, coupled with the operational tempo of the service members that we stand beside, often makes it near impossible for us to be gainfully employed and then maintain that employment.”

That means the spouses miss out, but so do employers: Military spouses often have access to better education opportunities because of military benefits and degree programs geared toward transient students. They’ve often seen more of the world than their counterparts. And they’ve had to learn to be flexible, not only with moves and deployments, but with making new friends and encountering new people on a near-constant basis. 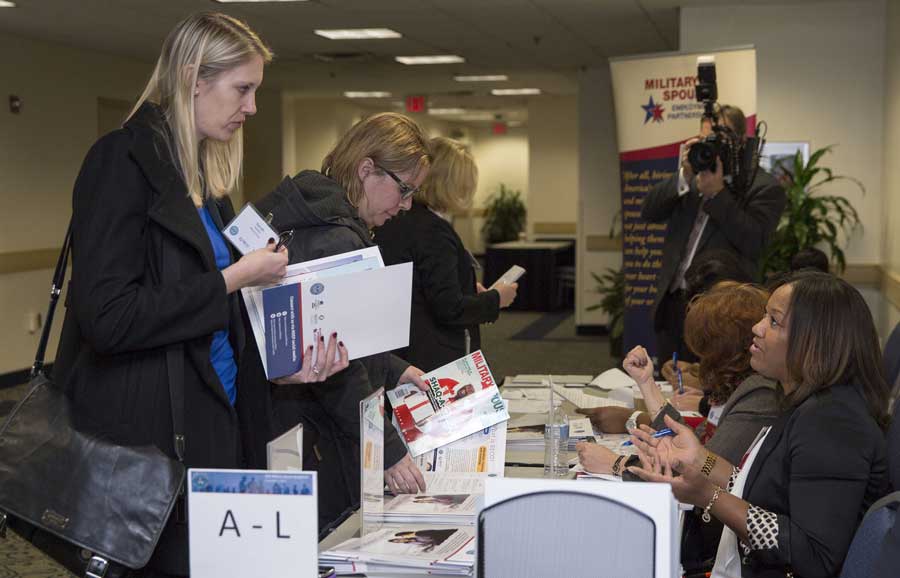 The Defense Department held its first-ever career symposium tailored to DOD spouses in Washington at George Washington University in the Marvin Center in 2014. Photo by Damien Salas, courtesy of the U.S. Army.

And, “Eighty percent of them are willing to or already have upskilled and reskilled into another industry,” Lozar says. “Forty percent have bachelor’s degrees. Nearly 40% of them have master’s degrees.”

But even with skills and degrees, many of the spouses face roadblocks finding mentors, networking opportunities, business leads—another area where Zoom meetings and virtual cocktail hours could help.

Mallory Boutin’s family is stationed in Newport, Rhode Island, and she works remotely as a financial services consultant.

“The difficulties around building a career as a military spouse are not just leaving and finding jobs every couple of years, which is certainly a burden,” Boutin says. “The big thing for me is the difficulty in building and capitalizing on a professional network.”

It’s hard to overstate how much things have changed since the beginning of the pandemic:

Fast Company reported that the completely remote workforce in the United States was about 3.4% at the beginning of 2020. Then a once-in-a-century pandemic swept the globe, and employers sent workers home, forcing companies to pivot to accommodate, in some cases, to a fully remote workforce. Fully remote employees had increased to 42% of the workforce by April of this year.

Some spouses suddenly saw remote job opportunities appear. Carolyn Bonaventura works as a civil engineer in water-wastewater management in Orlando, Florida. She was recently hired in a fully remote role.

“During Covid, this company obviously sent people home, and they found that it was working so well and really wasn’t impacting their business as much as they thought,” Bonaventura says. So far, she enjoys the option to work remotely and says it can be easier to review designs in a Microsoft Teams meeting using screen-share rather than in a conference room.

“I think it’s ideal,” Lafleur says of working remotely. “It’s almost like you can concentrate more.” 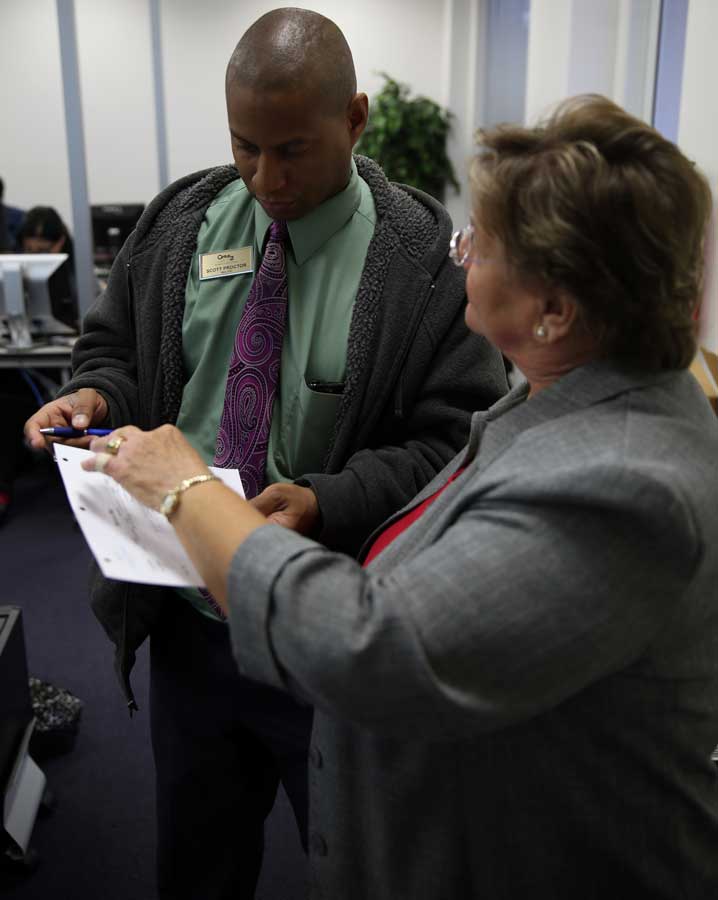 Research backs them up. One 2020 survey conducted by Mercer found 94% of employers reported productivity had remained the same or improved during the shift to remote work, and 83% of employers plan to provide increased workplace flexibility post-pandemic.

And many employees prefer to work from home. In an April survey on Blind, an anonymous professional network, 35% of respondents said they would leave their jobs if forced to return to the office.

That isn’t an empty threat: Nearly four million employees quit their jobs in June of 2021 alone—another four million quit in July, 4.2 million in August, and 4.4 million in September—according to the Bureau of Labor Statistics, in what’s being called “The Great Resignation.” While it’s impossible to say the exact causes for resignations, employers requiring people to return to their desks at the main office may be part of the problem.

‘We Don’t Have to Do That Anymore’

Many companies plan to keep their remote workforces, at least in part, moving forward, and have even hired fully remote employees in positions that otherwise would not have been eligible to be remote. In June, Facebook CEO Mark Zuckerberg announced that full-time employees whose jobs can be done remotely will be allowed to continue to telework. Twitter officials have said the same.

And it’s not just tech. Positions in marketing, administration, and human resources have all had success in telework, according to Lozar.

Even so, there have been drawbacks.

“We have started to see corporations pull back on their remote work and their telework and say that was temporary, we don’t have to do that anymore, we’re going to go ahead and return to the office,” Lozar says.

Beyond the oft-cited need for social interaction, offices without toddlers or needy dogs, and one-on-one client engagement, traditional management culture may be the toughest hurdle for remote workers. 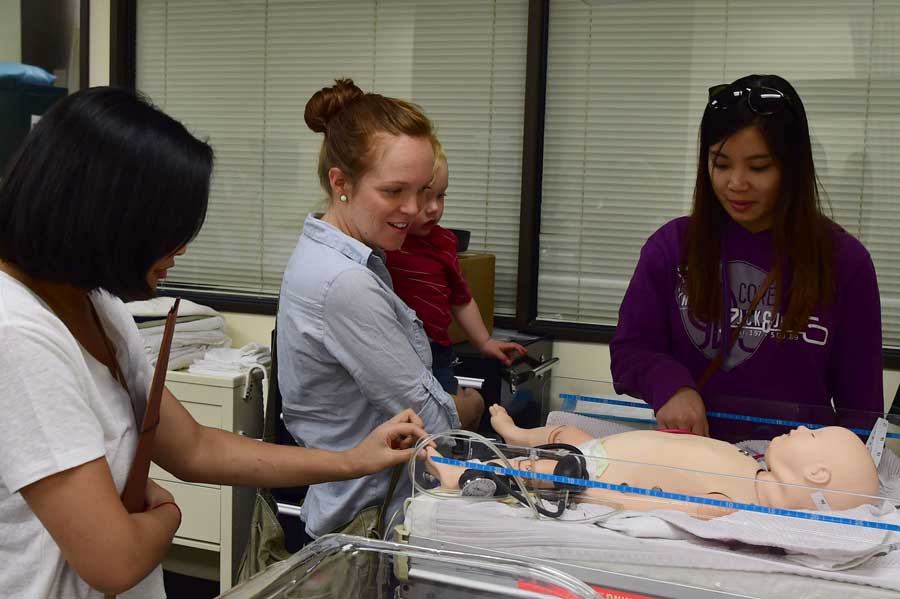 Three spouses selected to attend Pickens Technical College to obtain nurse aide certification receive a tour of the facilities where they will be learning the basics of nursing in 2017 at Pickens Technical College in Aurora, Colorado. The program is being paid for in full by the Air Force Aid Society’s Spouse Employment Grant, which provides spouses of military members an opportunity to obtain portable careers. Before rising rates of remote work because of COVID, military spouses rarely could take their work with them. Photo by Senior Airman Luke W. Nowakowski, courtesy of the U.S. Air Force.

Still, a Gartner survey of 317 CEOs found that 74% plan to maintain at least some remote workers.

Lozar says she is hopeful that remote options will continue and that spouses will benefit.

“If we go back to the office and we forget how successful we’ve been at remote work, military spouses are going to find themselves back at square one,” she says. “The good is that we have shown that we can do it when everyone said we couldn’t do it, and we can’t lose sight of that.”

For spouses who found work or are able to keep work because of Covid, there’s a noticeable sense of relief.

“This will be the first time in almost 13 years that I will be able to take my job with me when I move,” Boutin says. “That makes planning for our move so much easier.”

Lafleur says she feels less stress since learning she could take her job with her during the next change of duty station. She has returned to the office but says her employer is now open to her continuing to work remotely—something that would not have been an option pre-Covid.

“Because military life is fun, I have personally had, ‘Oh, your husband’s deploying. Oh, no he’s not. Oh, you’re PCSing. Oh, no you’re not,’” she says. “So, every time we’ve had one of those scares, my boss has been like, ‘Don’t worry about it. You’re just going to work from home wherever you go.’”

This War Horse investigation was reported by Julie Zack, edited by Kelly Kennedy, fact-checked by Ben Kalin, and copy-edited by Mitchell Hansen-Dewar. 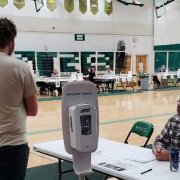 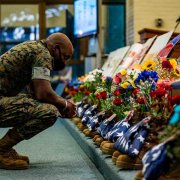 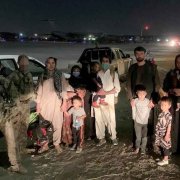 The Story Behind Operation Pineapple Express, a Daring Rescue Effort in Afghanistan

As Much Soldier as Muslim, More Patriot Than Believer
Scroll to top