I wake to the sound of police sirens and helicopters hovering near my Capitol Hill apartment, the windows open on a warm, humid summer night in Washington. Groggily waking from light sleep, I check my phone: 12:23 a.m.

The sounds and sensations feel like Afghanistan, but my wife sleeps soundly next to me. No, we are in the nation’s capital, but my former Army co-workers patrol our streets to enforce curfew, and Lakota medevac helicopters fly low, maneuvering to intimidate protestors. I feel ashamed to be in bed while many Americans protest racism and systemic racial inequality.

As a queer combat veteran, I spent a large part of my time in service fighting for the repeal of “don’t ask, don’t tell,” the insidious policy that effectively barred LGBT service members from serving their country if they lived honest and authentic lives. As a queer woman living through “don’t ask, don’t tell,” I experienced a small taste of what prejudice and discrimination feel like. It stung particularly hard coming from the very people whose lives I swore to protect and the Constitution I swore to defend.

My journey to advocacy was never easy, nor was it a foregone conclusion. As a mild Midwesterner, I was drawn to the values of the military: selfless service and quiet professionalism. To stand out or speak out was not a virtue in the military. And while the military was far from perfect, it gave me one of the greatest gifts: its people. The military provides the proverbial cross-section of America, bringing together people from all socioeconomic classes, races, and geographies—people I never would have met had I stayed in my southern Indiana hometown.

While I learned much about fighting for my own rights, I also learned that my struggle, and how I went about it, could never be the same as the seemingly endless struggle against racism and its long, deadly history in this country. 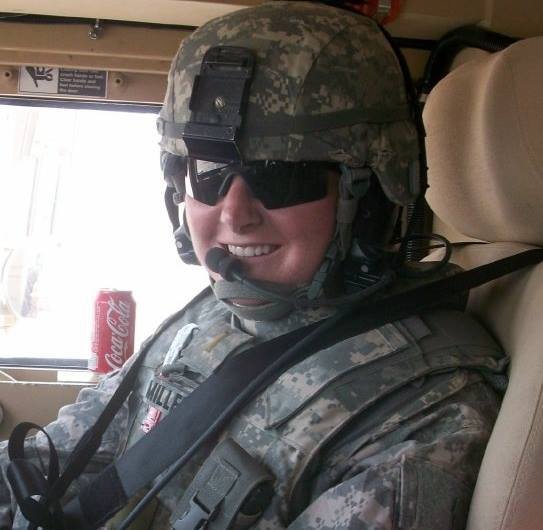 Emily Miller in Basra, Iraq, before heading out on an engineering mission.

When I came out as gay at West Point in 2005, I shared my secret with my family and a few trusted close friends. With “don’t ask, don’t tell” alive and well, fellow cadets received dishonorable discharges and were booted from the academy if they were exposed as gay. Fellow classmates turned in some cadets, while others were caught in the act of holding their boyfriend or girlfriend’s hand.

Not only were they expelled from West Point, but they often had to pay back the government for their tuition—about $300,000, a life-changing consequence. That we were bound by the West Point honor code and the time-honored values of duty, honor, and country—all while forced to compromise our own personal integrity—was not lost upon us.

I found my tribe at West Point. “The family,” as it was called, comprised an underground network of LGBT cadets, sworn to secrecy to protect our identities. We lived double lives as gay cadets. During the week, we had packed academic schedules, multiple duties as team captains and leaders in our respective units, and a desire to serve our country.

But on the weekend, we piled into the train together and ventured to New York City, experiencing a taste of liberation surrounded by other queer people at gay bars and lesbian parties. This group of friends did, in fact, turn into family. They were immigrants, Black kids from the South, white Midwesterners with religious and fervently anti-gay families, and poor kids from the Panhandle. Many would have had no home to return to had they come out as gay to their families. The weight of our secret and shame forced us together for kinship and survival, and, in doing so, created a deep and lasting bond among us.

Upon graduation, we dispersed across the Army and the world. We woke to the reality that homophobia ran rampant in the Army, and our physical bonds with each other dissolved as our physical distance increased. As one of the early members of my West Point class to deploy in February 2009, I went directly to Iraq, where I connected with my unit, which had already been in-country for months.

I served as an engineer platoon leader to 30 mostly male soldiers in Basra, Iraq. Leadership is a lonely endeavor, but that experience was amplified as a queer woman in a remote outpost in southern Iraq. Homophobia was commonplace in the Army in this era—rife with offensive marching cadences, including the disgusting “soldier with the pink beret.” Slurs and hateful remarks weren’t uncommon, and I censored my email messages and was mindful of who I spoke to on the phone. We were reminded often that all messages were screened and monitored for operational security. Rumors spread that multiple LGBT soldiers had been caught exchanging messages with their partners back home and were discharged.

Distraught at the hate and isolation, I volunteered, once home, my time with KnightsOut—a group of LGBT West Point alumni that fought for the repeal of “don’t ask, don’t tell.” As the first active-duty LGBT service member on their board, I spoke and wrote anonymously in various media outlets and persuaded my fellow gay service members to participate in the HBO documentary The Strange History of Don’t Ask, Don’t Tell, where we shielded our faces and voices to protect our identities. 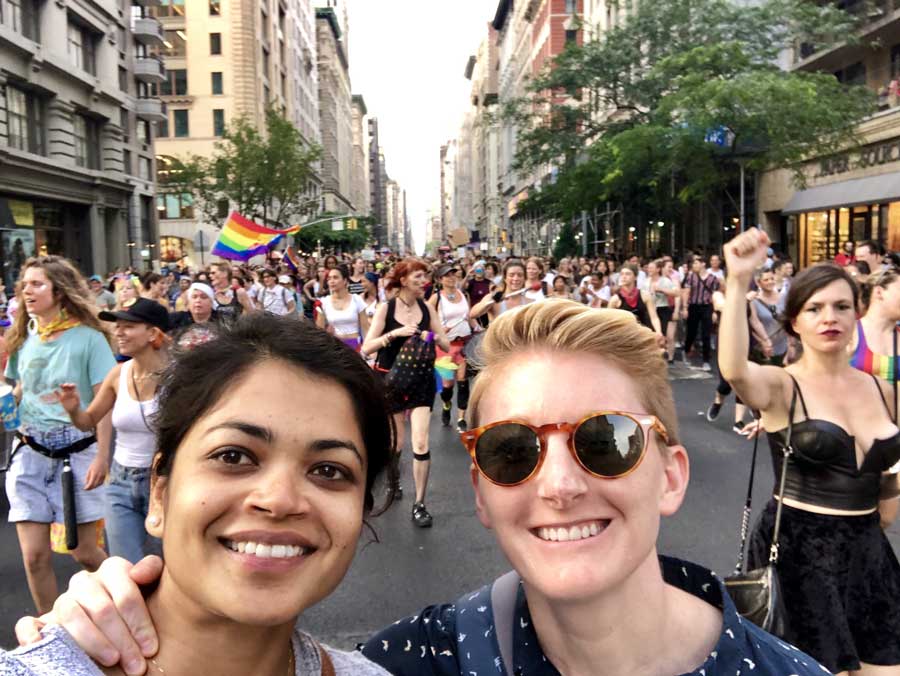 Emilly Miller and her wife, Lakshmi Kannan, at 2019 New York City Pride during the 50th anniversary of the 1969 Stonewall riots.

Though there were protests, we believed that if we lobbied from within for change, we would be more persuasive to our military allies. And our efforts mostly worked. In 2010, President Obama repealed “don’t ask, don’t tell,” allowing gay and lesbian military members to openly serve. I thought to myself then that this was a step in the right direction, even though it left out our transgender service members, and they have remained in legal limbo ever since.

To celebrate, I got a tattoo on my left wrist: “AEQUALITAS” in all caps—the ancient Latin battle cry for equality forever inscribed on my pulse. It was, at the time, a practical decision. I would need to hide the word from most of the people I worked with in the Army, who didn’t know I spent my free time as a gay rights advocate. I could hide the tattoo in plain sight under a watch when I was in hostile territory, or I could expose it when in the right circumstances—at Pride or with queer friends. It was emblematic of my double life: What you see is not exactly what you get.

As a queer woman, I was lucky (or cursed?) that I could “pass” as straight when I wore the right clothes, the right demeanor, the right makeup.

Right before leaving the Army, I chopped off my hair and changed my physical appearance to connect with my authentic self and to bridge the dissonance in my life. Others met me with surprising judgment and rancor based on their perception of me as “different”—now that I no longer had long, blond hair. Suddenly, men on the streets snickered at me; a hateful man called me a “dyke” as I bought my morning coffee; and numerous people mistook me for a man.

I cowered in the face of this treatment. Before going to sleep each night, I looked at my calendar to assess who I would meet with the next day so I could plan, calculate, and assess what I should wear to appease those in attendance. I tried my best to make others feel comfortable—an unfortunate and deeply rooted Midwestern trait I can’t seem to shake. To not be “too butch” or “too manly.” To time my haircuts.

And yet it occurs to me now that my ability to code switch as a queer white woman is a tremendous privilege. Black Americans and people of color do not have this choice. They wear their color day in and day out—a heavy burden in America that costs them their lives and livelihoods.

As a mentor of mine pointed out, the arc of justice for gay rights has been short when compared with that of racial equality in this country. With the repeal of the Defense of Marriage Act, as well as “don’t ask, don’t tell,” the legalization of gay marriage, and the latest Supreme Court ruling ending workplace discrimination against LGBTQ citizens, my life and its inherent privileges shifted drastically in the course of five years. I am now lawfully wedded to my wife, an immigrant from India, and am able to serve my country openly should I so choose: all things that were not possible five years ago.

Because of this stretch of legal victories securing our rights, I had come to believe the way we fought for the repeal of “don’t ask, don’t tell” was the right way. To be patient, to speak out, to listen to the opposition, and to fight from within. If we waited to change people’s minds, if we fought for equality the legal and quiet way, we would eventually win. But witnessing the struggle of Black Americans in this country has made me realize the limits of what I considered the “right” approach and how unevenly that approach works based on what you’re fighting for. 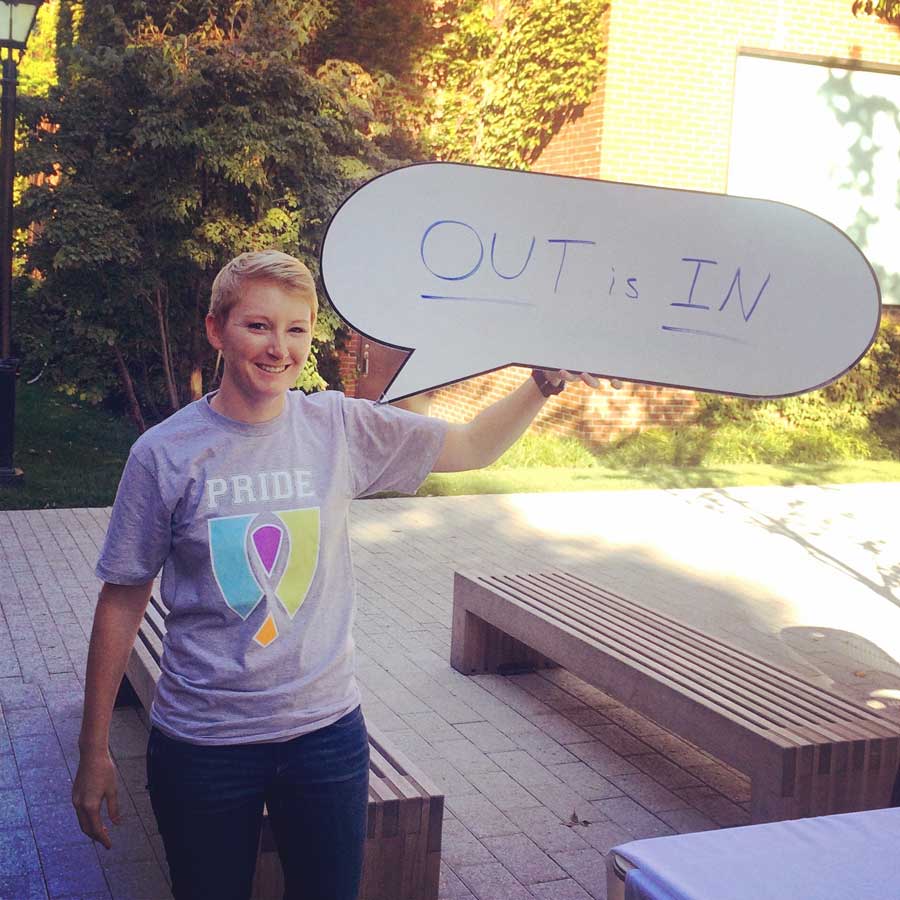 Colin Kaepernick can peacefully protest racial injustice in this country by taking a knee, only to be shunned and made a pariah. But my fight to be included as a gay woman in the military was accepted: because I wasn’t a threat to the entire system, and perhaps because I fought to uphold such traditional institutions as the military.

Only now do I see that the options that were available to me were and are never available for many Black Americans.

This Pride month, I’m hopeful that we are beginning to see the ripples of change. There is no queer liberation without Black liberation. My white privilege precluded me from understanding this sooner. The Black and brown trans and queer people who provided the catalyst for the gay rights movement through their riots at Stonewall knew this a long time ago.

To my fellow veterans and service members, let us examine the institutional racism inherent in all the systems we are a part of, and how we uphold it unconsciously or consciously. To my white queer community and allies, let’s remember that Pride was a riot and protest first, and that we stand on the shoulders of activists like Marsha P. Johnson, who knew viscerally how intersectional our fights for justice are. For my part, I now realize that simply being an ally isn’t enough—we must endeavor to act on our allyship and use our privilege to dismantle racism and the systems of injustice that perpetuate it.

There is much work to be done. 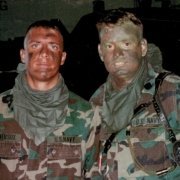 You Have Not Seen The Last Of These Marines

The Curse of the White Cloud

A Sailor Signs Up to Escape Poverty, Finds Terror Instead
Leaders Are Forged as a Rocket Falls

The Surge Nobody’s Talking About: The U.S. War in Somalia
Scroll to top